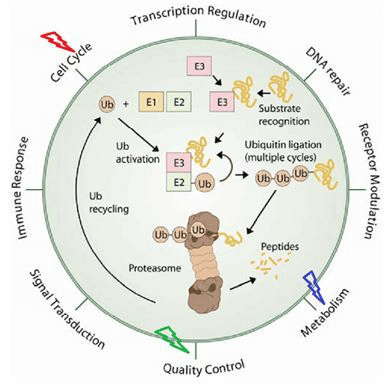 Protein degradation mediated by the ubiquitin proteasome pathway is an important mechanism for the body to regulate the level and function of intracellular proteins. The components responsible for performing this regulatory process include ubiquitin and its initiating enzyme system and proteasome system. The ubiquitin priming enzyme system is responsible for activating ubiquitin and binding it to the protein to be degraded to form a polyubiquitin chain of the target protein, that is, ubiquitination. The proteasome system can recognize and degrade ubiquitinated proteins. In addition, there is another type of deubiquitinated protease that dissociates the ubiquitin chain molecule in the cell to form a reverse regulation.

The ubiquitin-proteasome pathway (upp) is composed of ubiquitinub and a series of related enzymes. In addition to ubiquitin, it also includes 4 enzyme families: ubiquitin-activating enzyme (E1), ubiquitin coupling enzyme (ubiquitin-conjugatingenzymesE2s) is also called ubiquitin carrier protein (ubiquitin-carrierprotein), ubiquitin-protein ligase (ubiquitin-ligatingenzymes (E3s) and proteasome (proteasome). Both protein ubiquitination and deubiquitination need to be mediated by multiple enzymes. Upp has both a high degree of substrate diversity and diversity for different regulatory mechanisms.