Epidermal Growth Factor Receptor (EGFR) is a receptor for epithelial growth factor (EGF) cell proliferation and signaling. EGFR is a glycoprotein located on the surface of the cell membrane and is a tyrosine kinase-type receptor that is activated by binding to ligands. EGFR is associated with tumor cell proliferation, angiogenesis, tumor invasion, metastasis and inhibition of apoptosis. 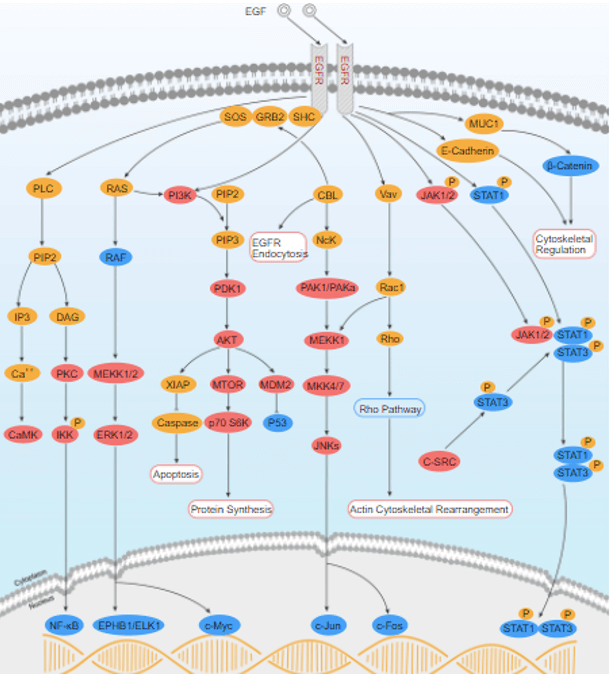 (Kandasamy, K, et al., 2019)The EGFR signaling pathway is one of the most important pathways regulating mammalian cell survival, growth, proliferation and differentiation. EGFR transmits growth-promoting signals intracellularly upon stimulation by its ligands (TGF α and EGF). Under normal conditions, the number of EGF ligands is tightly regulated and, as a result, cells tend to proliferate at a slower rate than required by the tissue. However, EGFR signaling is often permanently stimulated in cancer, mainly due to overproduction of TGF-α or EGF in the tumor microenvironment; or due to mutations in EGFR itself resulting in sustained activation of downstream signaling pathways.

Epidermal growth factor (EGF) is one of the high-affinity ligands of EGFR. The EGF/EGFR system induces growth, differentiation, migration, adhesion, and cell survival through a variety of interacting signaling pathways. The binding of EGF to the extracellular domain of EGFR induces dimerization, activation of intrinsic kinase activity and subsequent autophosphorylation of EGFR at multiple residues in the cytoplasmic region. Activated EGFR recruits various cytoplasmic proteins that transduce and regulate EGFR function. EGFR also activates phospholipase C, and one of the PKC-regulated signaling modules in the EGFR pathway is the NFKB module. Other signaling modules activated by EGFR include FAK, JNK, p38MAPK, and ERK5 modules. EGFR induces the JNK pathway through activation of G proteins such as RAC and CDC42. As growth, differentiation and cell survival factors; mutation and overexpression of EGFR and defective regulation of its signaling pathways have been shown to be associated with tumorigenesis. Therefore, EGFR and its signaling components are promising targets for the effective treatment of various cancers.

EGFR is a receptor that can be activated by EGF or TGF-α. Upregulation of EGFR protein is associated with different types of cancers, especially breast cancer. EGFR antagonists have emerged as a major target for therapeutic interventions in cancer.