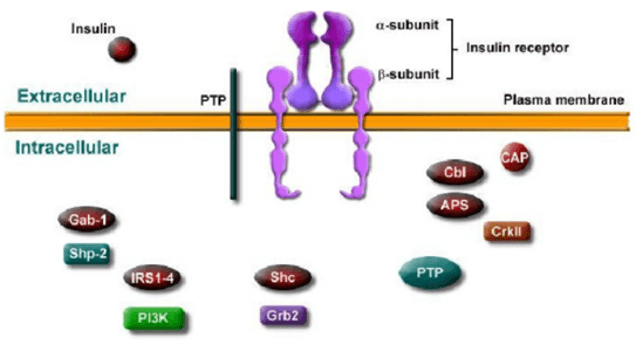 (Joshi, T., et al., 2019)As the most serious microvascular complication, diabetes mellitus, caused by chronic hyperglycemia, leads to the dysfunction of many cells of the kidney and eventually to the development of renal failure.

The main pathophysiological alteration of diabetes signaling is insulin resistance in target tissues with insufficient insulin secretion. Among them, impaired insulin signaling plays an important role in the pathogenesis. Therefore, insulin signaling in diabetes is of great importance.

The diabetic signaling system is regulated at multiple levels by different mechanisms and can be cross-linked with the signaling systems of other hormones (growth factors, cytokines) to modulate each other, thus ensuring that the diabetic insulin effect proceeds in an orderly manner according to physiological needs. Abnormalities in different aspects of diabetic signaling can interfere with the physiological function of insulin, leading to insulin resistance.