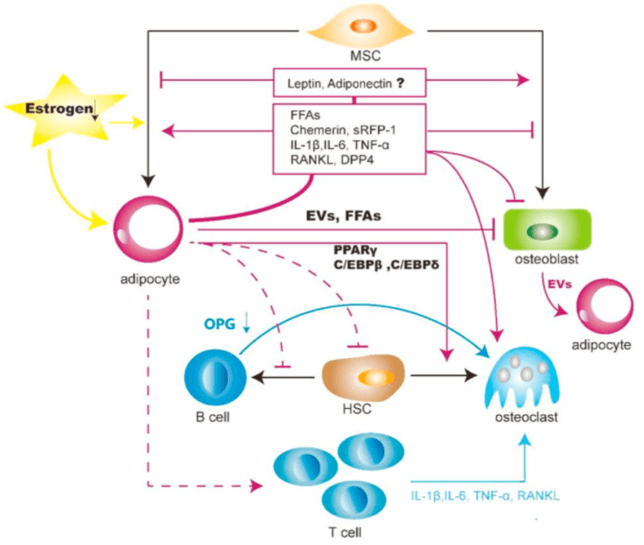 (GUO Yao, et al., 2018)Chemerin is a newly discovered adipokine that is mainly secreted by adipose tissue in an autocrine or paracrine form. Chemerin affects glucolipid metabolism by binding to its receptor, recruiting inflammatory cells, regulating insulin sensitivity and adipocyte differentiation. Therefore, Chemerin may play an important role ian obesity, metabolic syndrome and osteoporosis. In addition, Chemerin is closely associated with cardiovascular diseases, tumors, non-alcoholic fatty liver, polycystic ovary syndrome and psoriasis, and can be secreted by adipocytes, act on its own receptor CMKLR1 via the autocrine pathway to promote adipocyte differentiation and glucose transport, and act on inflammatory response cells (e.g. macrophages) via the paracrine pathway, which may be a new therapeutic This may be a new target for the treatment of related diseases.

The chemerin protein is a secreted adipokine whose physiological or pathological function requires binding to one of three receptors on the cytoplasmic membrane, CMKLR1, CPR1 or CCRL2, which in turn trigger different downstream molecular events or silent chemerin signaling. physiological processes, such as bone mass maintenance. The chemerin/GPR1 signaling pathway has also been shown to have similar functions due to the high structural similarity between CPR1 and CMKLRI.

Creative Proteomics has developed a signaling pathway target detection platform. We can provide detection services not only for chemerin signaling pathways, but also for other signaling pathways. If you want to detect other targets, please contact us in advance and we will customize the service for you according to your requirements. Looking forward to working with you.