The Notch signaling pathway is a highly conserved cell signaling system present in most multicellular organisms. They regulate the development of many biological cells, from sea urchins to humans. Notch signal affects multiple processes of normal cell morphogenesis, including differentiation of pluripotent progenitor cells, apoptosis, cell proliferation, and formation of cell boundaries.

Notch signaling plays a pivotal role in the regulation of many fundamental cellular processes such as proliferation, stem cell maintenance and differentiation during embryonic and adult development. The notch cascade consists of notch and notch ligands, as well as intracellular proteins transmitting the notch signal to the cell's nucleus. In mammalian cells, there are four different notch receptors, referred to as NOTCH1, NOTCH2, NOTCH3, and NOTCH4, which display both redundant and unique functions. Notch receptors are large single pass Type I transmembrane proteins. The extracellular domain of all Notch proteins contains 29–36 tandem epidermal growth factor (EGF)-like repeats, some of which mediate interactions with ligand. After specific ligand binding, the intracellular part of the Notch receptor is cleaved off and translocates to the nucleus, where it binds to the transcription factor RBP-J. In the absence of activated Notch, RBP-J represses Notch target genes by recruiting a corepressor complex. Notch signaling is dysregulated in many cancers, and faulty notch signaling is implicated in many diseases including CADASIL (Cerebral Autosomal Dominant Arteriopathy with Sub-cortical Infarcts and Leukoencephalopathy), T-ALL (T-cell acute lymphoblastic leukemia), Alagille syndrome, MS (Multiple Sclerosis), and myriad other disease states. 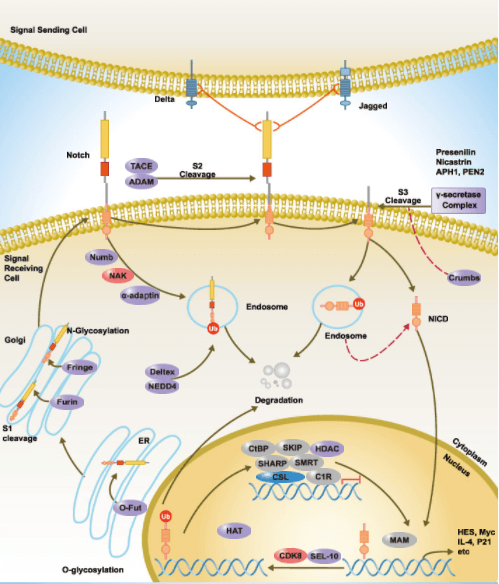 The Notch signaling pathway is a highly conserved cell signaling system that exists in most multicellular organisms. Notch signaling plays a key role in the regulation of many basic cellular processes, such as proliferation during embryonic and adult development, and stem cell maintenance and differentiation.