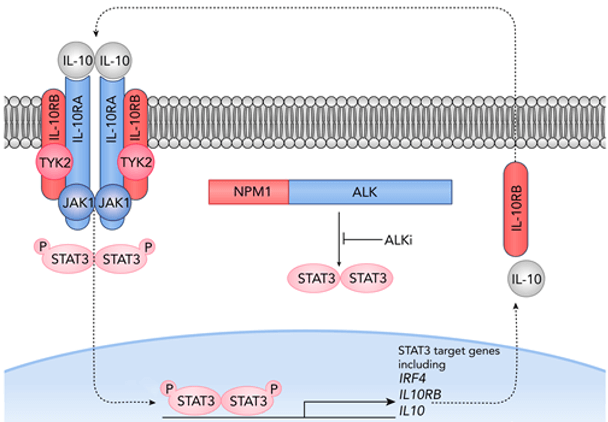 Anaplastic lymphoma kinase (ALK), aka CD246, is a tyrosine kinase receptor encoded by the ALK gene located on chromosome 2p23.2-p23.1. Commonly used monoclonal antibodies to ALK include the clones 5A4 and D5F3. IHC for ALK may be used for the analysis of Spitz tumors, since they may be associated with ALK-rearrangement and overexpression. Spitz tumors expressing ALK tend to be amelanotic and display a growth pattern of intersecting fascicles. ALK expression may also be seen in a small subset of primary and metastatic melanomas, where it is usually associated with the presence of a truncated ALK isoform. IHC for ALK may be used as a screening method to identify rare ALK-positive melanomas to select patients for treatment by ALK inhibitors.

Anaplastic lymphoma kinase was first described in 1994 as the NPM-ALK fusion protein that is expressed in the majority of anaplastic large-cell lymphomas. ALK is a receptor protein-tyrosine kinase that was more fully characterized in 1997. Physiological ALK participates in embryonic nervous system development, but its expression decreases after birth. ALK is a member of the insulin receptor superfamily and is most closely related to leukocyte tyrosine kinase (Ltk), which is a receptor protein-tyrosine kinase. Twenty different ALK-fusion proteins have been described that result from various chromosomal rearrangements, and they have been implicated in the pathogenesis of several diseases including anaplastic large-cell lymphoma, diffuse large B-cell lymphoma, and inflammatory myofibroblastic tumors.

The EML4-ALK fusion protein and four other ALK-fusion proteins play a fundamental role in the development in about 5% of non-small cell lung cancers. The formation of dimers by the amino-terminal portion of the ALK fusion proteins results in the activation of the ALK protein kinase domain that plays a key role in the tumorigenic process. Downstream signaling from ALK fusion proteins involves the Ras/Raf/MEK/ERK1/2 cell proliferation module and the JAK/STAT cell survival pathway. Furthermore, nearly two dozen ALK activating mutations participate in the pathogenesis of childhood neuroblastomas along with ALK overexpression. The occurrence of oncogenic ALK, particularly in non-small cell lung cancer, has generated considerable interest and effort in developing ALK inhibitors.

Anaplastic lymphoma kinase (ALK) is named after it is found in anaplastic large cell lymphoma (ALCL). It is a receptor tyrosine kinase that belongs to the insulin receptor superfamily and is specifically expressed in adult brain tissue The ALK gene targeted therapy drug crizotinib has achieved good results in the treatment of a variety of tumors.