Th17 cells are a subgroup of cells that secrete IL-17 (ie IL-17A) discovered in 2003, and together with Th1, Th2, and Tregs, they constitute four subgroups of CD4+ T cells. Th17 cells are differentiated from Th0 cells under the stimulation of IL-6 and TGF-β. It plays a key role in immune regulation, host defense and autoimmune diseases.

The effector molecules produced by Th17 cells mainly include IL-17A and IL-17F. IL-17A and IL-17F have similar functions and can act on a variety of cell types to induce the production of cytokines, chemokines and metalloproteinases. In addition, Th17 cells also secrete IL-21 and IL-22. IL-21 regulates the differentiation of Th17 in an autocrine form. IL-22 exerts its effects through its receptor. 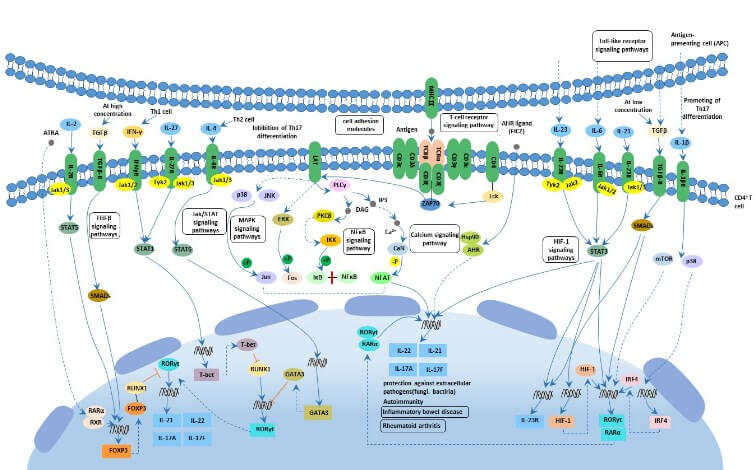 The main function of Th17 cells is to promote the mobilization, recruitment and activation of neutrophils, and to mediate pro-inflammatory reactions. It is closely related to the occurrence of autoimmune diseases, infectious diseases and tumors.

Th17 cell differentiation mainly includes three stages: induction, expansion and stabilization. At each stage, the differentiation of Th17 cells is finely and complicatedly regulated by a variety of cytokines and signaling molecules.

Th17 cells are differentiated from Tho cells under the stimulation of IL-6 and TGF-β. It plays a key role in immune regulation, host defense and autoimmune diseases.