Pyroptosis refers to the autonomous and orderly death of cells controlled by genes in order to maintain the stability of the internal environment. Pyroptosis is different from cell necrosis. Pyroptosis is not a passive process, but an active process. It involves the activation, expression and regulation of a series of genes. It is not a kind of autologous damage under pathological conditions. Phenomenon, but a process of death actively striving for better adaptation to the living environment.

Pyroptosis is a basic life phenomenon widely existing in the biological world, and it plays a very important role just like cell growth, development, and proliferation. At present, it is believed that the extracellular stimulus that induces pyroptosis must be transmitted through a series of intracellular signals, and the selective breakage of DNA between nucleosomes is one of its important signs.

Pyroptosis is characterized by morphological changes such as the condensation of the nucleus, the chromosomal DNA being cut into ladders with nucleosomes, the shrinking of the cells, and the final formation of apoptotic bodies. Does not cause the lysis of surrounding cells. Pyroptosis is sporadic in the cell population, progresses in stages, and depends on the supply of ATP and the synthesis of RNA and protein. It is an active elimination mechanism. It can be observed not only during ontogeny and under physiological conditions such as egg cell shrinkage, but also under many diseases and pathological conditions such as autoimmune diseases, neurodegenerative diseases, and ischemic diseases. The intracellular information transmission pathway of pyroptosis can be roughly divided into two stages, namely the induction stage and the implementation stage. There are endogenous and exogenous factors that induce pyroptosis in the induction stage of pyroptosis. Endogenous factors include the activation of pyroptosis-inducing mechanisms (such as Fas ligand, tumor necrosis factor, etc.) and the inactivation of inhibitory mechanisms (proliferative factors such as growth factors, hormones, receptor factors, etc.). 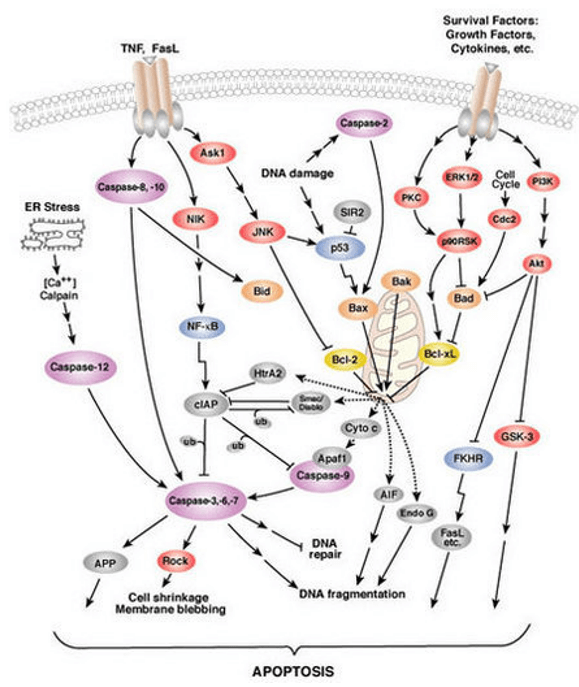