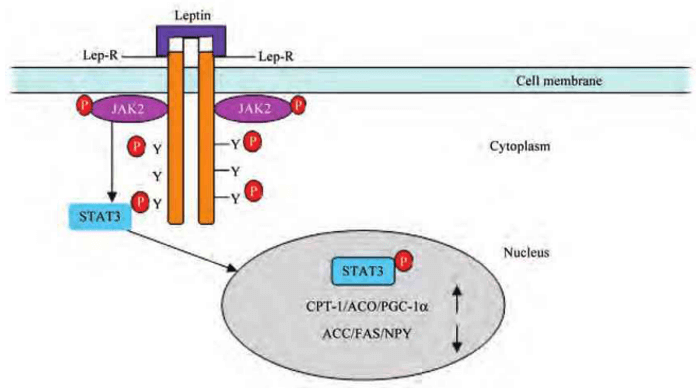 (Brennan AM, et al.2019)Leptin is a secreted protein encoded by the ob gene located on human chromosome (7q 31. 3) and exerts its physiological functions by binding to the leptin receptor. Leptin is a pleiotropic hormone that can participate in the proliferative and anti-apoptotic effects of several systems simultaneously. Previous studies have suggested that leptin can reduce appetite and body weight, regulate fat deposition and energy balance, regulate neuroendocrine effects, and participate in the immune response of the body. Recent studies have found that leptin plays a role in promoting tumor cell proliferation and metastasis by mediating certain intracellular signaling pathways.

Leptin is a hormone produced in fat cells that affects the brain and some other peripheral tissues. It plays a key role in the regulation of endocrine function and control of energy expenditure. In addition to adipose tissue, the leptin signaling pathway has regulatory roles in other tissues including placenta, ovary, skeletal muscle, pituitary and lymphatic tissue. Leptin regulates food intake and also plays a key role in energy expenditure, metabolism, neuroendocrine axis and immune function.