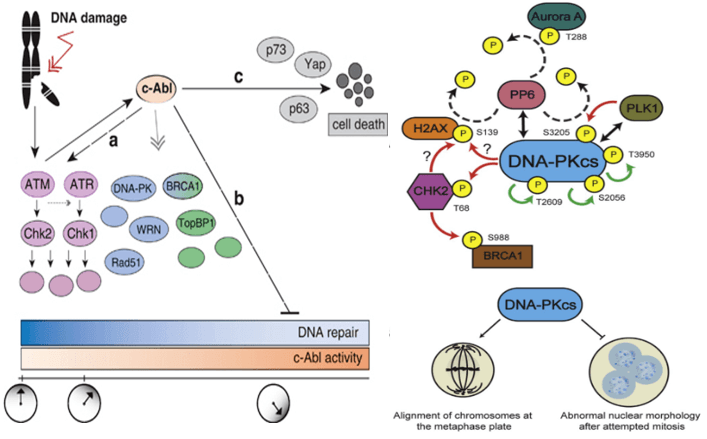 The DNA-dependent protein kinase (DNA-PK) is a serine/threonine protein kinase composed of a large catalytic subunit (DNA-PKcs) and the Ku70/80 heterodimer. Over the past two decades, significant progress has been made in elucidating the role of DNA-PK in non-homologous end joining (NHE), the major pathway for repair of ionizing radiation-induced DNA double strand breaks in human cells and recently, additional roles for DNA-PK have been reported.

DNA-dependent protein kinase (DNA-PK) is one of the most important enzymes that bind DNA and repair double-strand breaks. This type of repair is essential to produce receptors that can help the immune system defend against invaders. But DNA-PK not only binds DNA, but also binds RNA.

DNA-PK exists in the organelles that make ribosomes. DNA-PK mutations can impair protein translation in red blood cell progenitor cells, which may lead to anemia. And recent studies have found that DNA-PK seems to be related to ribosome assembly.

The DNA-PK signaling pathway is essential for the cell viability of almost all cell lines (including cancer cell lines), and many other proteins involved in the same DNA repair pathway are not essential. Several previous studies have shown that the DNA-PK protein level in ordinary human cell lines is 50 times higher than that in rodent cell lines.

DNA-PK is a serine-threonine protein kinase that requires ends of double-stranded DNA or transitions from single-stranded to double-stranded DNA for activity. It is composed of a kinase element known as DNA-PKcs and a DNA binding element known as Ku, which is itself a heterodimer comprising Ku80 and Ku70. Cells lacking DNA-PK activity as a result of a mutation in any of the subunits are radiosensitive to killing and deficient in the rejoining of radiation-induced DNA DSBs. The DNA-dependent protein kinase signaling pathway plays an important role in DNA double-strand break repair and mitosis and other cellular processes.