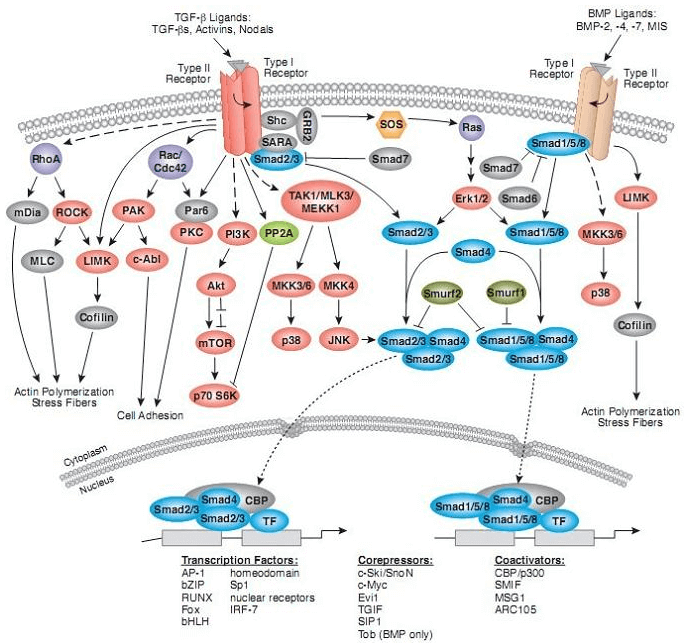 Smad 2, and Smad 3 participate in the TGF-β and activin signaling pathway, while Smad 1, Smad 5 and Smad 8 regulate the BMP signaling pathway. R-Smads and Smad 4 are mainly located in the cytoplasm, and their activity is mainly regulated by adaptor proteins, such as Smad anchored receptor activator protein (SARA) and ELF. Smad 2 and Smad 3 are directly phosphorylated by TGF-β RI, which changes the conformation and releases them from the receptor complex. The MH2 domain of Smad 4 protein recognizes the phosphoserine at the C-terminus of R-Smads to form a heterodimer complex (R-Smad/C-Smad). These complexes are transported to the nucleus, where the Smad protein binds to homologous DNA and has low adsorption capacity, but it can enhance the affinity under the action of transcription co-activators. Smad 3 and Smad 4 bind to a DNA sequence called SBE, and Smad 2 reacts with the DNA complex through interaction with Smad 4. The shuttle of Smad protein's dependent phosphorylation between the cytoplasm and the nucleus is of great significance for the dynamic regulation of TGF-β signaling.

The Smad signaling pathway is the main conduction pathway of TGF-B, and its transduction process requires precise regulation of its components. Smads protein is an important signal molecule for TGF-B ligand transduction from the receptor to the nucleus to perform fibrogenic function. It mainly includes: receptor-activated Smad (receptor-activated Smad, R-Smad), such as Smad2 and Smad3; general Type Smad (common Smad, Co-Smad), such as Smad4; inhibitory Smad (inhibitorySmad, I-Smad), such as Smad6 and Smad79-0. In addition, factors that inhibit the TGFB signal transduction pathway include transcriptional co-repressor c-Ski and its related protein SnoN located in the nucleus.