Death receptors belong to the tumor necrosis factor receptor (TNFR) gene superfamily. To date, eight members of the death receptor family have been characterized: TNFR1 (also known as DR1, CD120a, p55 and p60), CD95 (also known as DR2, APO-1 and Fas), DR3 (also known as APO- 3. LARD, TRAMP and WSL1), TRAILR1 (also known as DR4 and APO-2), TRAILR2 (also known as DR5, KILLER and TRICK2), DR6, ectodysplasin A receptor (EDAR) and nerve growth factor receptor (NGFR) ). These death receptors are characterized by a cytoplasmic region of approximately 80 residues called the death domain (DD). When these receptors are triggered by the corresponding ligands, many molecules are recruited to the death domain, and then the signal cascade is activated. Two types of death receptor signaling complexes can be distinguished. The first group includes the death-inducing signaling complex (DISC) that causes caspase-8 activation, the latter playing a central role in the transduction of apoptosis signals. DISC is formed at the CD95 receptor, TRAILR1 or TRAILR2. The second group includes TNFR1, DR3, DR6 and EDAR. These recruit a different set of molecules that simultaneously transduce apoptosis and survival signals. 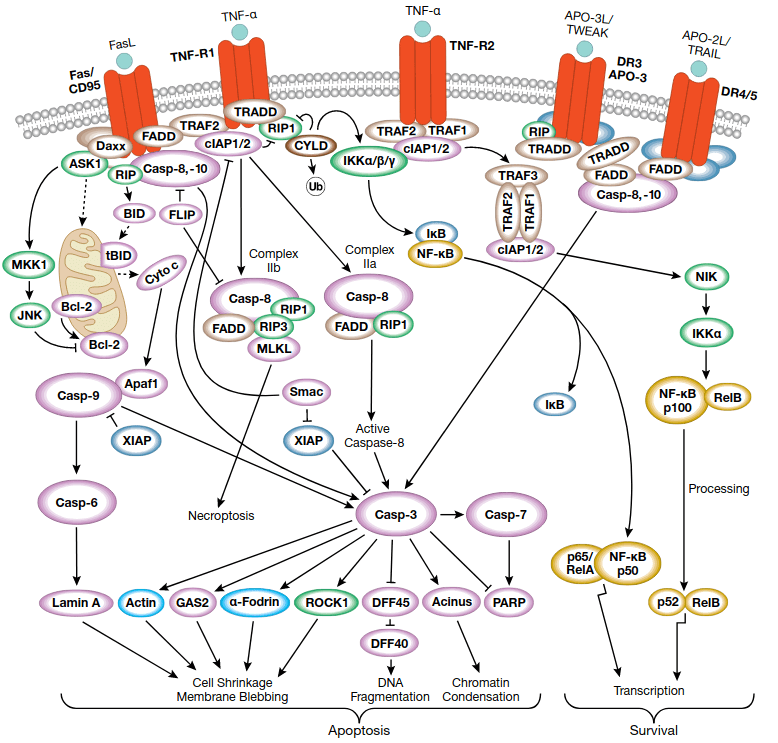 Death receptor ligands initiate signal transduction through receptor oligomerization, which leads to the recruitment of specific adaptor proteins and the activation of the caspase cascade. The binding of FasL induces the trimerization of Fas, thereby recruiting priming caspase-8 through the adaptor protein FADD. Then, caspase-8 is oligomerized and activated by autocatalysis. Activated caspase-8 can induce apoptosis through two parallel cascades: it can either directly cleave and activate caspase-3, or cleave the pro-apoptotic protein Bid of the Bcl-2 family. The truncated Bid (tBid) translocates into the mitochondria and induces the release of cytochrome C, thereby activating caspase-9 and -3. TNF-α and DR-3L can transmit pro-apoptotic or anti-apoptotic signals. TNFαR and DR3 promote cell apoptosis through the adaptor protein TRADD/FADD and activation of caspase-8. The interaction between TNF-α and TNFαR can activate the NF-κB pathway through NIK/IKK. The activation of NF-κB induces the expression of pro-survival genes, including Bcl-2 and FLIP, the latter can directly inhibit the activation of caspase-8. FasL and TNF-α can also activate JNK through ASK1/MKK7. Activation of JNK inhibits Bcl-2 through phosphorylation. In the absence of caspase activation, the stimulation of death receptors can lead to the activation of another programmed cell death pathway through the formation of complex IIb, which is called necroptosis.

Death receptors include a variety of molecules and are cell surface receptors that can transmit apoptosis signals triggered by specific ligands and play a central role in guiding apoptosis. 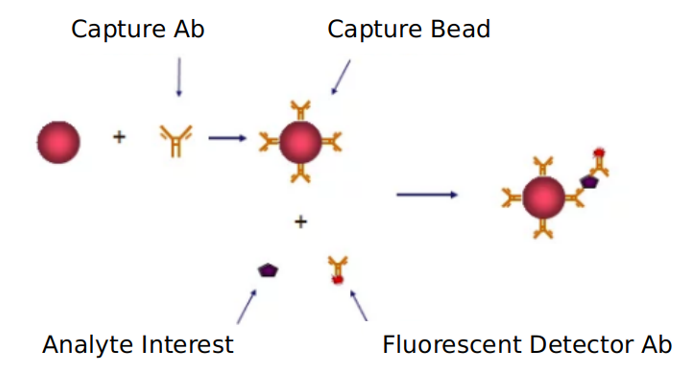