Functional B cell receptors are multi-protein complexes composed of antigen-binding subunits and signal transduction subunits. The B cell antigen receptor (BCR) is composed of cell membrane immunoglobulin (mIg) molecules and related Igα/Igβ (CD79a/CD79b) heterodimers (α/β). The mIg subunit binds to the antigen, leading to receptor aggregation, while the α/β subunit transmits the signal to the inside of the cell. After BCR accumulates, it rapidly activates the Src family kinases Lyn, Blk and Fyn, and the tyrosine kinases Syk and Btk.

Signals from signal bodies activate multiple signal cascades, including kinases, GTPases, and transcription factors. This will lead to changes in cell metabolism, gene expression and cytoskeletal structure. The complexity of BCR signal transduction can lead to many distinct outcomes, including survival, tolerance (disability) or apoptosis, proliferation, and differentiation into antibody-producing cells or memory B cells. The outcome of the response is determined by many factors, including the mature state of the cell, antigenic properties, the scope and duration of BCR signal transduction, and signals from other receptors (such as CD40, IL-21 receptor, and BAFF-R). Many other transmembrane proteins, some of which are also receptors, can modulate specific parts of BCR signal transduction. Some of these transmembrane proteins include CD45, CD19, CD22, PIR-B and FcγRIIB1 (CD32), which are marked in yellow here. The scope and duration of BCR signal transduction are limited by the negative feedback loop, which includes Lyn/CD22/SHP-1 pathway, Cbp/Csk pathway, SHIP, Cbl, Dok-1, Dok-3, FcγRIIB1, PIR-B And internalization of BCR.

In vivo, B cells are usually captured by antigen-expressing cells and activated after exposure of the cell surface. Activation of B cells by this membrane-associated antigen requires BCR-induced cytoskeletal remodeling. In recent years, B-cell receptor signaling pathways have been widely used in many biologic drugs and small molecule drugs in the field of B-cell lymphoma treatment. 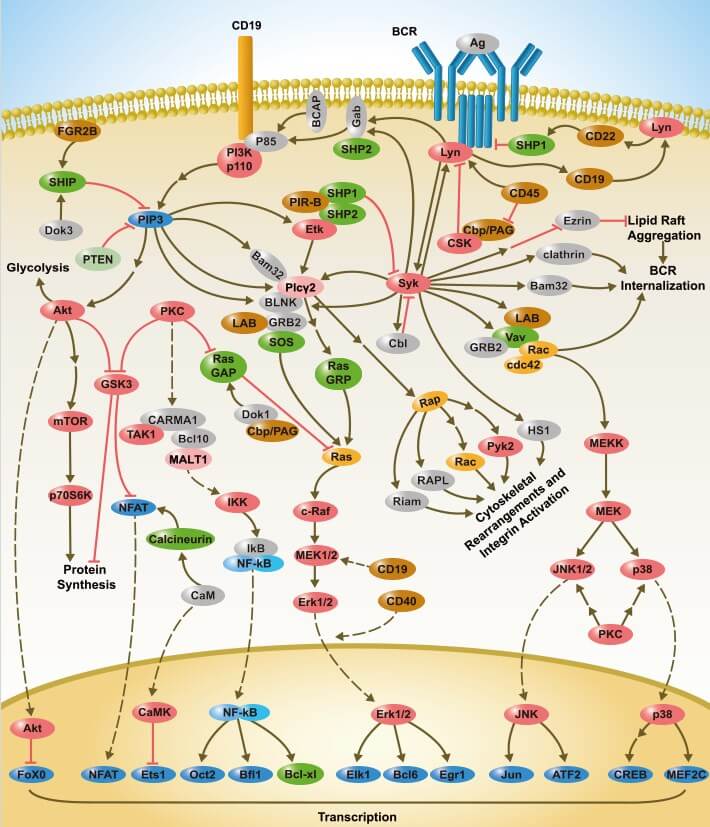 B cells are usually captured by antigen-expressing cells and activated after exposure of the cell surface. The B cell receptor signaling pathway is widely used in many biological drugs and small molecule drugs in the field of B cell lymphoma treatment.